Come join us in the warm glow of “October Skies” This gorgeous line of fabrics brings all the beauty of an autumn harvest. From warm pumpkin orange to the lush harvest plums. You will be ready to create a bounty of fall projects.

Designer, Verna Mosquera, had create a collection like no other. October Skies is a celebration of all that is delicate and bountiful about autumn. The fresh color scheme was derived from such things as Cinderella pumpkins, pepper berries, fallen leaves, acorns, butternut squash, dried wisteria, rose blooms and California sunsets.  The vintage floral prints are brought to life when combined in this very unique color scheme. It is a collection filled with warmth and romance, a new approach to this artfully abundant season.

What about creating some new placemats or a runner for an exquisite thanksgiving table? Or a seasonal throw to warm up the cool fall nights. The “October Skies” are the limit when you choose any fabric from this collection.

Come to Homespun Hearth today and check out the hospitality and warmth of the season. 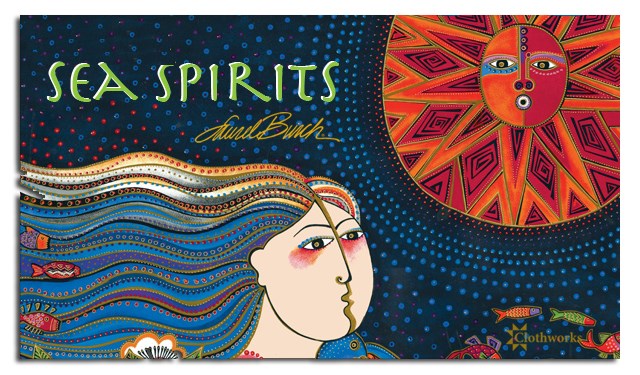 Homespun Hearth is proud to announce that we are the first to offer Laurel Burch’s beautiful new line of Fabric named Sea Spirits. This a wonderful opportunity to create with this unique artist’s fabric vision. Join her in exploring her whimsical sea.

This dramatic new collection by Laurel Burch for Clothworks features 13 fabrics  in all. In rich purples, blues & green, the Spirit of the Sea will languish in these beautiful designs. The bundle includes the striking panel, 1 yard of the border fabric, and either 1/4 yard or 1/2 yard each of the 11 coordinating fish and sea horse  fabrics. If you love Laurel Burch fabrics, then you are going to want to add  this unique fabric to your collection!

From Laurel Burch, herself:

“Art is a universal language, and through imagery that is understood and recognized by all people everywhere, I believe that we can share the grace of birds in flight, feel the warmth of friendships, explore the exquisite beauty and mysteries of the earth and savor the preciousness of life. When I design and paint, I remember that it is you, my friends and kindred spirits all over the world, who have inspired me to speak in a common language. I wish to express my deepest gratitude for your appreciation of my art and for the opportunity this has provided me to live my life with courage, purpose, and joy. Thank you for all you are and for all we are to each other. – Laurel”

Brighten up those Christmas Nights with the fun wall hanging by Aspen Peak
Designs. Featuring the Stonehenge Starry Night fabric by Deborah Edwards for
Northcott, and the set of bright lights that illuminate the quilt, this wall
hanging measures 35″ x 44″ and is the perfect entryway holiday
greeter! 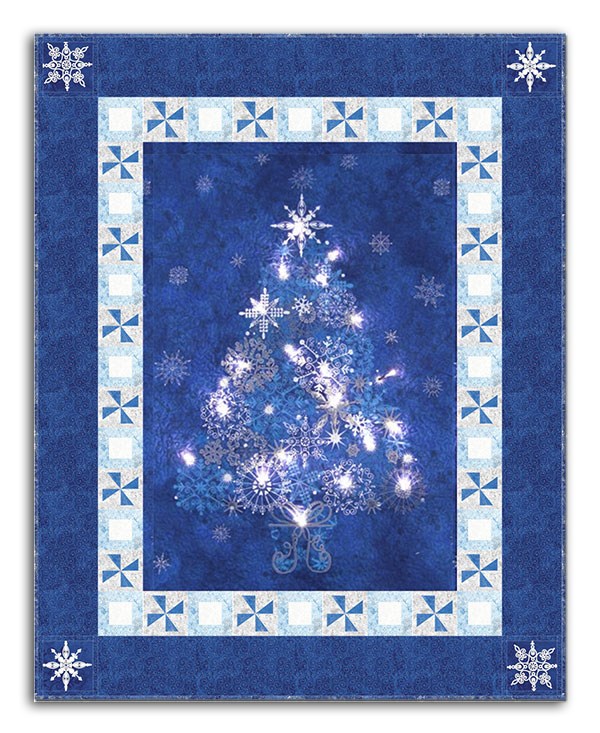 The kit includes all of the fabric required to complete the wall hanging as shown, including binding, easy-to-follow instructions, and the set of lights. Coordinating backing fabric (1.5 yards) is also available. It’s available in two colorways, warm and cozy reds or winters night blues.

What’s unique about this kit is the lights. You make buttonholes sprinkled around the tree and thread the battery powered lights from the backside. The front side becomes a twinkling holiday fantasy.

This is a Beginner/Intermediate design.

We are happy to announce the introduction of a wonderful and whimsical line of fabrics and printed fabric panels. This darling line of bird fabrics are a perfect compliment to any nursery decor. With a color palette of spring green, sunny yellow, lavender and vibrant red, you are sure to make a beloved quilt for any baby girl or boy. What’s even better, this line of fabrics will easily take their bedroom decor through their pre-K years.

We have conveniently package them in three different bundles to suit your needs. Each includes two panels with the option of quarter, half or 1 yard groupings of the six coordinating fabrics. I f you need to make a shower gift or decorate a nursery, there’s a grouping ready to sew. We have included two free patterns with purchase. compliments of Susybee as well

Susybee is Toronto artist and illustrator Susannah Bleasby. She delights in creating a world filled with whimsical illustrations and happy characters for kids (& kids at heart) through her line of children’s fabrics, her paintings and her murals.

Have a peek – I think we can make you smile!  Let us know what you think  🙂

We are excited to announce that we are opening up reservations for our extremely popular “Baltimore Brides” block of the month program.

This stunning design, inspired by an 1847 Baltimore Brides Quilt, has been adapted to wool by Jackie Aspessos of Lakeview Primitives. This gorgeous reproduction quilt comes in 2 version — either flannel and wool or Matka Silk and wool — both beautiful combinations.  The background fabric (in either black or ivory, and flannel or Silk) are striking backdrops for the motifs that are hand-dyed wool applique. The 12 block quilt measures 68″ x 83″. This is the perfect heirloom that you can give that special bride in your life.

If you have ever been inspired to make a quilt that will be handed down from generation to generation, this is where you can begin. There is no reason to be intimidated by this beautiful quilt, each block is broken down into easy to follow directions. Block of the month kits offer fabrics and supplies in a convenient monthly shipment. With a once a month program you will find a single block becomes a

manageable project to complete. Soon you will find you have it all done with no stress or guilt that can accompany unfinished projects. You can sit back and admire your work. Here you will have the opportunity to applique and quilt with wools or silks that you might not have tried, if you shopped at you average quilt shop.

Step up your quilting skills with “Baltimore Brides” and create a family heirloom.

Our 7th annual Quilting in the Rockies retreat got under way last week at the Inn at Palmer Lake just north of Colorado Springs. These quilters braved the dark, rainy conditions that we were experiencing in Colorado that week. We certainly have dedicated quilters who travel from across the United States to attend and a handful have made it every year. There were quilters from California to Pennsylvania, and we even had several from flood stricken Lyons and Boulder, Colorado. Sadly, a couple had to leave a little early when husbands reported basement flooding.  Eventually we braved the dreary condition and warmed our selves by getting to work.

The week started out on Tuesday afternoon when everyone got checked in and settled into their rooms. The Inn is a cozy place with just 24 rooms, but each one has a spectacular view of the front range or of Elephant Rock. A meet and greet was held and a lot of lugging in of equipment. It’s not an easy task to take your sewing on the road.

Two quilts are offered, an early bird quilt, which is optional, and the much anticipated mystery quilt. With a theme of Surf’s Up, you could be sure they would be fun and a little whimsical. The early bird quilt was a serene sea themed quilt in sea glass greens and blues. Its a collection called Serenity by Cheri Strolle for Northcott fabrics. It definitely brought to mind a beach cottage and gentle waves (we’ll show you a picture later this week). The waves were created by the split second ruler and enhanced with a sprinkling seashell appliques.

This year’s mystery quilt, designed by Julie, was certainly influenced by her recent trip to Hawaii!   It was offered in bright, beachy batiks or a softer, neutral palette of Stonehenge by Northcott. Both were spectacular in their own way. While the batiks evoked the warm tropics, the neutrals brought to mind the beauty of southwestern nature. Each day the quilters watched her demonstrate a block or two, then they were given the fabric for the block and went to work. The blocks were titled Pineapple, Trade Wind, The Sun, The Wave and Birds of Paradise. Lot’s of dedicated work, but also a lot of laughs, friendship and fun went on during the week.

The days had plenty of time for breaks and the ladies were served excellent meals. We also had additional make-and-take crafts, such as a pineapple pin cushion and a fabric hibiscus.  And of course, there is always time for some games and giveaways.  The Homespun Hearth store was set up in the corner so our quilters could take a break and pick out some fat quarters, kits or the latest supplies.

The weekend wrapped up on Saturday night with a real pig roast. It was delicious, but most were slightly creeped out by its green olive eyes!  By Saturday night, everyone was happy (and a bit tired! ) and very excited to have accomplished a new quilt top. I know many will be back and hopefully some new quilters will join us for the 8th annual festivities in 2014.

We are all about getting ready for the best Christmas season ever. We have chosen some great projects to share with you. Pick one up today and you will be “Fa La La-ing” as you close out summer.

This is an adorable Table Runner – a two sided Santa with a Mistletoe Wreath in the center, has been a customer favorite year after year.  Designed by Kathi  Campbell of Heart to Hand, the runner measures 11″ x 42″.The kit includes the easy-to-follow instructions with full size templates, 100% Hand Dyed Wool for applique, Black Matka Silk Background, and backing fabric to make the entire runner.

Have you reserved your Tour de Jardine?
One Beautiful design, Two Gorgeous Colorways!

Stay connected with us as we blog about great ideas, new products, and fun giveaways that are targeted especially to quilters. We want to get to know you, so please leave comments whenever it strikes your fancy.